Get the update soon on @elementary #AppCenter, or on #Flathub!

It was a fun challenge to update Warble from GTK3 to GTK4, although a bit frustrating at times. I hope that by walking through some of the specific changes I made, you might not struggle quite as much as I did! Wherever possible I will include links to the diff in GitHub so you can see the exact change that I made.

You can view the full diff of changes here: avojak/warble/pull/39

The obvious first step is to, well, pull in GTK4 as a dependency!

And if you’re using an IDE, you’ll immediately be met with a giant slap in the face. Compile errors out the wazoo! If you’re like me, you had no idea that Libhandy was going away (and I was just getting used to it…). Turns out, Libadwaita is the successor. Not to worry, this is an easy substitution!

Now all you have to do is quickly rush through your code, take a quick guess at how to fix the compile errors, rebuild, run, and…

Me: *Updates Warble to GTK4 and spends a couple hours resolving all the compile and runtime errors* 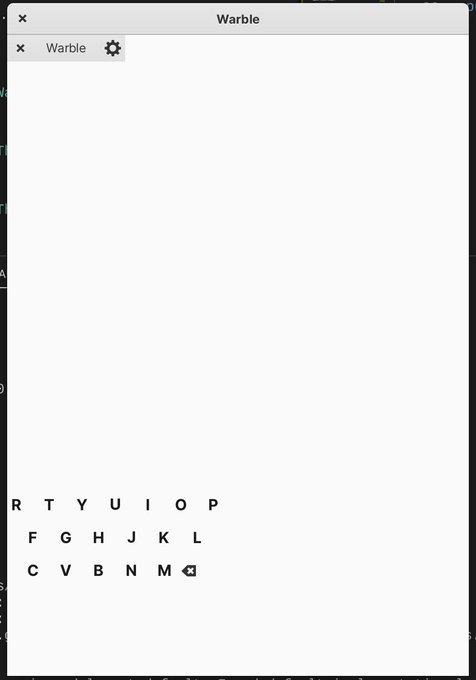 Welp. This was when I realized that it wasn’t going to be a quick update!

I’m going to pause briefly here to list some resources that I found helpful along the way:

There are two main input methods in Warble: using the physical keyboard attached to the computer, and the on-screen keyboard.

With GTK3 and Libhandy, I used the key_press_event signal on the Hdy.Window, but GTK4 introduced a new event controller system.

A relatively small difference in this case, but worth noting.

Mouse input is more significantly different. Instead of needing to use widgets such as EventBox, and using Gdk.EventMask for the various event types you care about, we now use Gtk.GestureClick (or other similar controllers depending on the desired event type):

One error you will most certainly encounter is field 'parent_instance' has incomplete type. This is because many Gtk classes are now final and cannot be subclassed. I ran into this because I had subclassed Gtk.HeaderBar. In my case I simply created the header bar directly in a different class, but in other cases I had to use a different container widget.

Under GTK3, the method for doing custom drawing on a widget was to override the draw(Cairo.Context) method:

For GTK4, there’s a different approach that I can use. To draw the squares on the game board with letters, the squares are now Gtk.DrawingArea widgets. This class exposes a set_draw_func(Gtk.DrawingArea da, Cairo.Context ctx, int width, int height) method with some new convenience parameters for width and height.

Gone are the days of saving the position of the application window to the GSettings - now the window manager handles that for you!

This isn’t a change, but rather a new feature in GTK4 that I love. You can now use a blur() filter. In Warble, I combine blur with transparency on certain overlay views as a nice replacement for using a dialog:

I’m a big fan of how this turned out:

Not necessarily GTK4 related, but the ModeButton widget was removed from Granite. This is really a “shame on me” moment for using this widget incorrectly, but it might pose a “gotcha” to anyone else using it in a similar way.

The replacement is to use grouped Gtk.CheckButton widgets. For Warble, I created a simple wrapper widget (CheckButtonGroup) to handle the grouping.

I think the GTK method of grouping widgets in this case is rather clumsy. One common theme in GTK4 is the use of proper container widgets, yet here we create a “group” by assigning a sibling widget to the group property. Huh?? Now you end up with a widget that’s pulling double-duty as both an individual button, but also the group. In my opinion, a better design would be to create a specific group container widget that you add buttons to.

While not directly related to GTK4, I took this opportunity to leverage CSS for styling the game area and on-screen keyboard instead of using custom icons for each possible color scenario.

The icons for the squares were replaced with two lines of code to apply some CSS classes:

And the various states for the squares and keyboard keys were also represented with CSS classes:

When switching to high-contrast mode, all I had to do was swap out the stylesheet - no more changing ALL the icons!

As an added bonus, I was able to very easily add a subtle outline for the square on the game board that’s currently waiting for input. Previously this would’ve required a whole new icon.

Check out the end result over on GitHub!